It’s not often I feel compelled to write a post, I wish it were, filling a blog would be a much easier task.  However, yesterday I came across a build in InWorldz that was simply stunning, not only in its construction, but its texturing, attention to detail, concept and engaging layout.   Moreover, the most astonishing aspect is that, according to its creator Lar Jun, it is only 33% complete!

Outside view of Castle Marlar

As you can see from the pictures it is a castle, seemingly in good repair and order when one looks from the outside, but inside though it is a castle part in ruin.  I’m not sure whether we are to assume it’s in a state of decline or slowly being repaired.

Looking towards the citadel

Within the vast grounds of the interior there are small hamlets, a farm, a dock and a small town rising at the base of the main citadel.  Every tiny object has been placed with care and lovingly detailed.  Lar told me that he had been taking pictures of English castles and was now utilising them in the build and I can attest that it is with great effect.

One of the many paths through the build

The attention to detail doesn’t stop there though.  The build though massive has hidden tiny gems throughout to discover whilst walking along sunken and hidden pathways, which I won’t spoil for the reader by revealing here.  Even the interiors of the castle walls are navigable and authentically textured.

Lurking gargoyle found in the grass

For visitors and photographers alike you could spend hours exploring this build and it’s going to be worth returning to time and time again as it is only “33%” complete!  There is still about a quarter sim of open terrain as yet unbuilt upon and I’m sure Lar also intends to add much more to what is already built.  So this creation is only going to get bigger and better.

The citadel and surrounds

What I find most encouraging about this build and other similar ones in InWorldz such as Argonath castle is that creators are now prepared to embark on these projects outside of Second Life.  With a far greater prim allowance (45,000 prims) and only $75 for a whole region these large grandiose projects are much more achievable and affordable and I hope others follow this trend.

So if you have a good hour to spare and want to treat your eyes then I strongly recommend you visit this 3D masterpiece and enjoy watching it grow over the coming months.  Well done Lar! 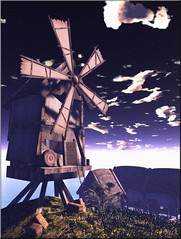 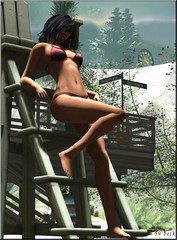 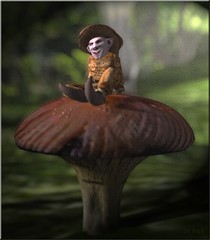